A valley of stark landscapes with snowy peaks touching the sky, gurgling rivers dotting the highlands and an ancient civilization that has survived for thousands of years preserving its cultural heritage against the onslaughts of modernity; North Sikkim offers such a panoramic natural and cultural vista that can keep a travel photographer in a click frenzy for months.

Our Tour operator had stressed that North Sikkim is the Switzerland of India.

We started for Lachen after lunch from Gangtok ascending to a height of 10000ft from 4000 ft. It had gone dark when we reached Lachen. Nestled in the lap of the Himalayas, Lachen stands on a grassy and bush flat from the periphery of which rise the pine-clad mountains with their snowy peaks and black cliffs. The village comprises only around 400 houses. The chill of the place at times became uncomfortable but the feeling of being at 10000 feet and covering the way to 17000 feet to Lake Gurudongmar was enough to give us warmth to bear the chill.

Heavily layered and packed, we set off at 4’O clock the next morning for Gurudongmar. Though it is just about 70 kms from Lachen; it takes over five hours on almost non-existent roads. So execrable were some stretches that we rocked and flew off our seats.

Our only stop in the journey was at around 7 AM at Thangu – a small hamlet which serves as a basic food stop for the journey. Fully momoed and maggied we again started for our course. In about an hour we were to cross the tree-line. From then on nothing but snow would be visible all over. The weather kept getting chiller and the air thinner as we ascended to the great heights. Hardly 3 kms above Thangu all signs of vegetation disappeared. From vibrant lush green, the scenery transformed into a snowy desert in a flash of seconds. The ascent to that height is gradual but the vehicle moved slowly as if it also struggled for air. An hour more and soon we came to a vast stretch of flat brown table-land surrounded by glacial snow peaks on either side. It was all white interrupted by the sudden flash of colours of the prayer flags as they fluttered and danced in the breeze. Tibetans believe that the prayers will be blown by the winds to spread compassion and love in all pervading spaces.

We were at the foot of Lake Gurudongmar. Legend says that the lake used to remain frozen for the whole year. So when Guru Nanak/Guru Rimpoche crossed; the locals approached him appealing for help. From then the part where Guru bathed does not freeze while the rest ices over. Water from this part is considered ‘Amrit’. The lake was all iced but for a stream of water emanating from one end. This small stream joins the stream from Lake Chalamou (19000 ft) to build up the Lachen Chu (Teesta). I had never loved the colour white so much before. The whole experience can be summarised in my friend’s words:

“The view from there is breathtaking, provided you have any breath left”.

We hurried ourselves to have some simple but wholesome food at Lachen and then leave for Lachung, some 40 kms from there. Lachung Accommodation is a few notches up in Lachung from that in Lachen. Our accommodation was arranged in a simple but sober hotel ‘Fortuna’ by the Tibet Tours and travels. In less than two hours we reached Lachung.

An interesting observation was that both Lachung and Lachen have a very different administrative system. Every year, in February a festival is arranged in these villages to elect their Pipon. Interestingly this is unique to these villages and the system had been in existence from even before 1976 (when Sikkim became a part of India). Pipon, is entrusted with all the administrative, executive and judicial responsibilities of the village.. In simple words as the hotel manager explained us –‘The pipon is like an elected lord for a year’.

We had a long chat with our manager about the Yumthang Valley or the ‘Valley of flowers’ Lachung is famous for. ‘Sir you will get to see Rhododendrons of shades you can only imagine of’ he told. He told us that 40 out of 50 Rhododendron species are indigenous to Sikkim and 23 out of them found only in this part.

It was seven in the morning and the sun had started shining brightly over the snow peaked hills, a scarlet of rhododendrons were disguised by the purposeful fog of the night, monastery bells chimed at a distance: where else can you dream of a better morning. And you feel even more blessed when offered a glass of fresh Yak milk.

We started off in search of the scent that brought us here from about 1000 miles away. The calmness of the hills carried a divine aura. The flags swayed furiously as the winds picked up pace. The fine settings adorned with yaks and herdsmen, matching the colours of this virgin beauty, seemed to be woven up beautifully to waylay tourists like us. Yumthang valley is 25 kms from Lachung village – a journey of an hour with Rhododendrons smearing their colour in the air and a carpet of Pirumala (a small herb with violet flowers) to greet you. It’s a rendezvous that evokes the feeling of romance. But travelling is more fun when it takes sudden turns. We discovered on our way that heavy snowfall and glacial flooding had led to road blockage and Yumthang wouldn’t be possible that day. But we still decided to head on crossing the beautiful meadow of rolling green, dotted with yaks and lined with shops selling Sikkim Rum. With so many Border Roads Organisation vehicles, we understood that the work is on. But this also proved out to be a wonderful serendipity. It was snow on all sides, the quantum I had never seen before. We soon joined the others in living these few minutes on the snow. Yumthang was left undone and our driver consoled us with “In May, it’s even more beautiful”. We could just smile. 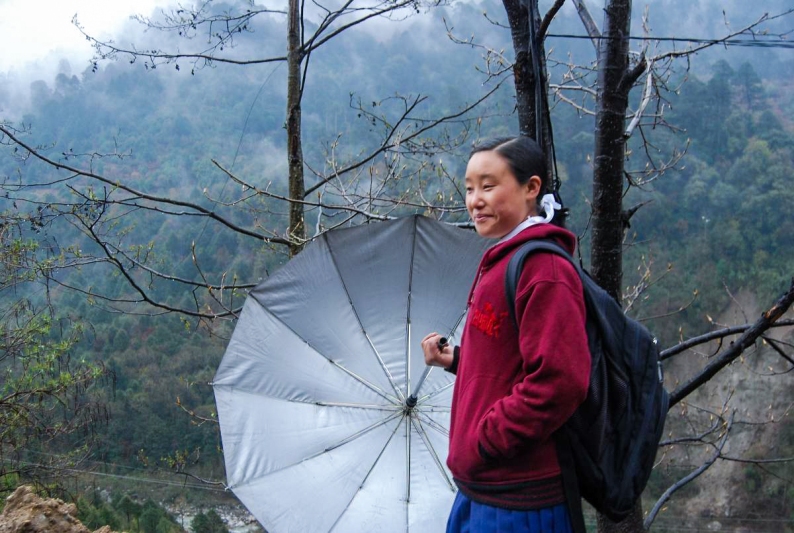 On our way back through the pastoral and pleasant settings we halted at the Lachung Monastery. Through the same settings of lofty hills where ferns hung like maiden’s hair, we made our way back to Gangtok crossing some gigantic waterfalls. Luckily it had been raining since morning. Bhim falls, a little away from Lachung, which appeared a thin line three days back had turned into a powerful water gun. The water churned vehemently, falling down with splendid, imperious force. A little before Chungthang we crossed the Naga falls, an unstoppable force cannoning out of the mountainside. Such mesmerizing cascades lined our journey. Every turn presented a new picture.

The scenic route is an absolute delight for eyes; as one can leisurely view and imbibe the amalgamation of rugged mountain sides and natural beauty with long winding roads seeming like strands of thread being strewn together. In less than 5 hours I was back in Gangtok. But these three days gave me experiences which I believe can neither be penned down to tell the story nor photographed to declare it. It can just be experienced and kept as a golden template in memory.