Its 4 am and I am driving on a surface that looks more Martian than that of our planet. The baked, grey earth over which we are driving is the Rann of Kutch. The stars are shining overhead in an ink black sky. We have no maps, no road signs or signals, no GPS coordinates and no roads to take us to the destined place. Our SUV, racing at a speed of 25 Km/hr looked like a space shuttle on the rugged surface of mars.

Being blessed with the beatific sight of huge flock of flamingos at Lake Neruru in Kenya, my yen for catching a glimpse of them in the Indian mainland was fuelled. This brought me to probably the most arid and tantalizingly beautiful landscape in the country – Rann of Kutch. I reached Bhuj with a set goal of capturing flamingos. From the beginning of my trip, the omens were bad. I had landed in the wrong season and this being a dry year hadn’t attracted many birds. But situations like this, often compel you to take the less travelled by route. A grand revelation came when I learnt that the manager of the Royal Orchid resort, Mr. Neeladri Das, was himself an avid birder and adventurer. It didn’t take me much time to rope him in this booty business. And that brought me, at 4 am, in a completely unknown surface with no landmarks, in search of flamingos. I am at Chaari Dhaand, a lesser known wetland in the midst of Rann. It does find a mention in the travel map of Kutch, but looking at the desolateness of the place, one can spot, that it is a less travelled by place. 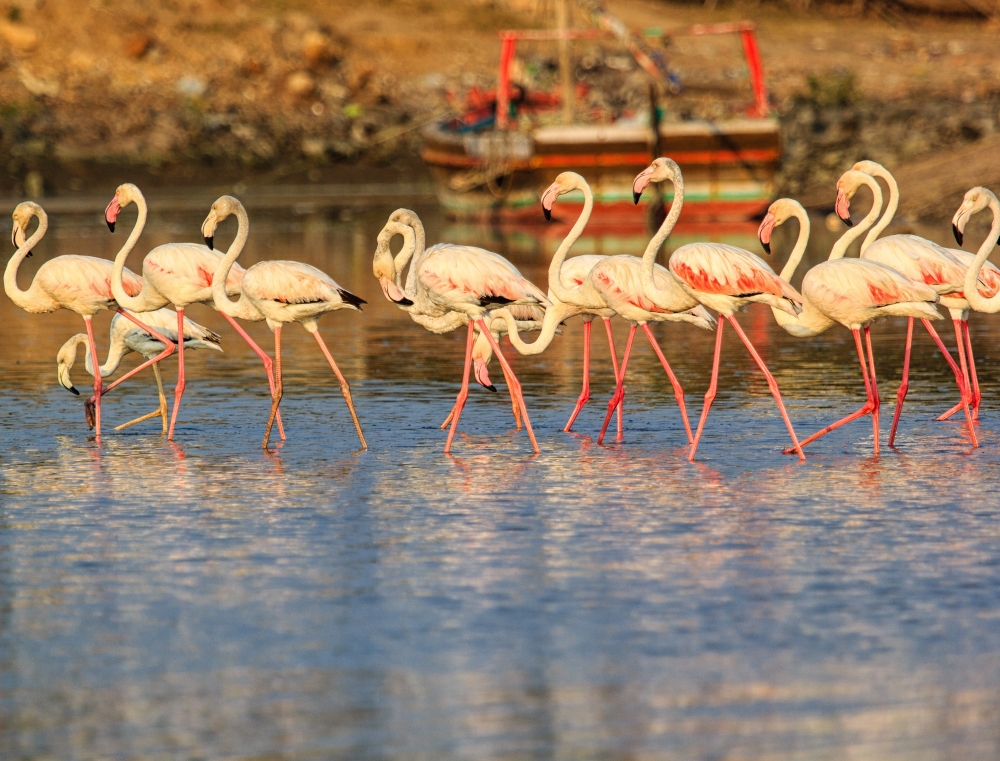 Our driver Suresh Bhai has been to this place once – at morning time. But this was night, where having no tracks to follow becomes the biggest barrier. And we were no Judas to follow the stars. While the clear night amazed us, the feeling of nothingness (no sign of vegetation) around us was haunting. We halted on that non-existent road, to breathe in the chillness of the night. It was dark and lonely and the road was parched and battered, yet surreal. After snaking our way through dusty villages, we had landed at a place, where roads virtually ended and we had to take the parched land. With no maps and even the faintest of idea of what direction we had to take, we started looking for wheel tracks and followed them. Just to make sure, that we follow the same track while returning, we piled heaps of rocks or the parched soil, at every turn we took. It was 5 am and there was virtually no sign of sun – no twilight either – it was ink dark. After having come for miles, we decided to halt and wait for sunrise.

At six, when the sky had started turning orangish, a great idea of finding the rare Grey Hypocolius, which is endemic to the Banni Grassland (of which Chaari Dhaand is a part) struck my mind. Applying the unique combination of my birding knowledge and Neeladri’s experience in the area, we started finding the berry tree Salvadora persica on which you can easily find this elusive bird. Though we couldn’t locate this rare bird, we did have a sighting of Stoliczka’s Bushchat, doing its “puff and roll” display (puff up the chest and skitter a little) and the famed desert cat skirting its way past us.

With the two posts near the wetland faintly visible to us, we made a move. The signs of coming in an ‘off season (the ‘on’ season is winter when the migratory birds come) were visible in clear sky. We missed the huge flocks of birds in the sky, something for which the Banni grasslands are famous. However, as we drove, we spotted some raptors, a short tailed eagle was hovering just above us, while a buzzard perched on top of an acacia tree.

Halting and slowing down to take some shots or focus on some activity in the grass, we moved forward towards the Chaari Dhaand wetland. As the sun had dawned, we could have a look at the landscape we had come through and we were going to. It looked a virgin land, with no sign of human inhabitation, except for the wheel tracks of the vehicles of tourists, for miles. The flats of Banni area in Kutch conceal many depressions where rainwater gets collected during a good monsoon. These shallow water bodies are locally known as dhand (Kutchi word for a water reservoir). The Chaari Dhaand is the largest of these covering an area of almost 10 sq. km.

As we drove past the first sign post of the Forest Department, we saw a row of something white on the lake surface. The first look and the instant conclusion – this is what we had come for – the magnificent lesser flamingos. Unable to control my excitement, I gladly said –‘This is just a sneak preview of what is on offer for us’. I was preparing myself to see hundreds of birds of uncountable species. We raced our vehicle to get to a spot to locate the flamingos.

I heard them before I saw them. A vast expanse of grassland, hint of salt in the air and a distant trumpet chorus greeting me; I raced forward through the puddles and the tall grasses to get to a safe position from where to shoot birds. A tottering ‘V’ of specks in the pale orange sky carrying a hint of blue, flew towards me. This was the troop of common cranes. Out in the distance was a huge huddle of lesser flamingos, heads down, busy, but still cautious. The Shovelers, comb ducks, painted storks, egrets, common teals, sandgrouse and many plovers joined in the chorus. The birds were in plenty. Banni supports countless migrants from over 200 species that winter here annually, some migrating as far from Scandinavia in droves. More than 50000 water fowls, colonies with more than a million flamingos, uncountable cranes and thousands belonging to other species, with more than 50 different animal species make this place special for birding and camping.

I digged further to know what brings thousands of birds of hundreds of different species to this land. Our friend and resort manager, Neeladri, told us about the tuberous roots of a nut sedge, which the cranes come looking for. While they rummage for the tubers, they leave behind tilted parches, for smaller birds to rummage for seeds. Flamingos come in huge numbers looking for the algae that blooms in these alkaline patches and gives them the pink colour on their coat.

I redoubled my focus to capture some more shots, some raptors wheeled above us, flamingos filtering the steel-blue waters for algae, pelicans quietly sashaying on the water like princess, the egrets taking cautious steps to find some unlucky mud-skippers, plovers rummaging for crabs, at a distance buffaloes taking holy dips; all in a silky frame silhouetted against the flaming orb of the sun: all in crystalline silence.

Near the lake we spotted some more human souls, these were local herders who belong to the tribe Rabari, Mutva, Jat, nomadic, who usually come to Banni grasslands where their camels feed on a shrub “Suaeda fruticosa”. I went forward to meet these herdsmen and got a humble invitation to have tea with them. And I was presented the ubiquitous tea of the deserts: thin, frugal brew – hot, sugary, and laden with spices. This was the time when I worried less about the photography and the landscape and listened to their stories. My host Mohammad, promised me to take to the hideouts of desert fox and Indian wolf and to teach me how to milk camel. These nomads would leave the area before April when the weather becomes unbearable. I sipped the tea and oogled at the rabari woman, her richly embroidered red tunics, and exquisite bejewelled nose, so typical of rabari women. 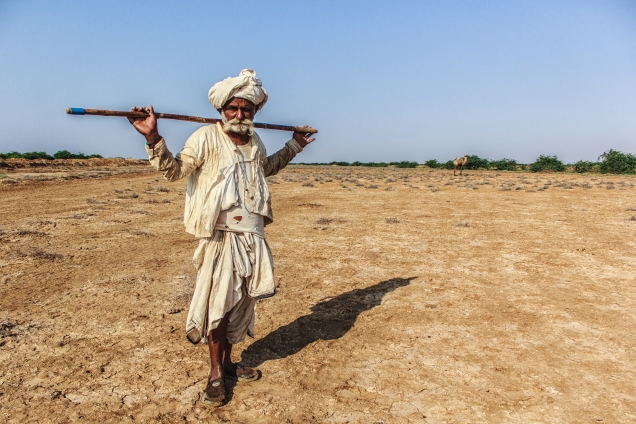 We got up to make our way back, through the same non-existent roads, searching for the trails we had left, looking for the stones we had piled for directions, leaving behind the golden savannah studded with occasional acacias, the raptors who perch on these branches and the thousands of birds. As we drove, we crossed some herders with their camels, fitting in the landscape as a colour coded topomap. This frieze of motion seemed a perfect place to learn stillness.

Chaari Dhandh in Banni grassland is around 60 Kms from Bhuj city. Chaari Dhaand is a Ramsar site and an important birding site. Always go with an expert birder and a local resource. My trip was well arranged by Regenta resort of Royal Orchid group. You can also go to some nearby village like Fulay and take a local guide. Ficus Wildlife and Natural History (ficuswildlife.net) also arranges birding tours in this area.

November through February is the ideal time to visit when there is the promise of Banni’s verdant avatar in the monsoon.