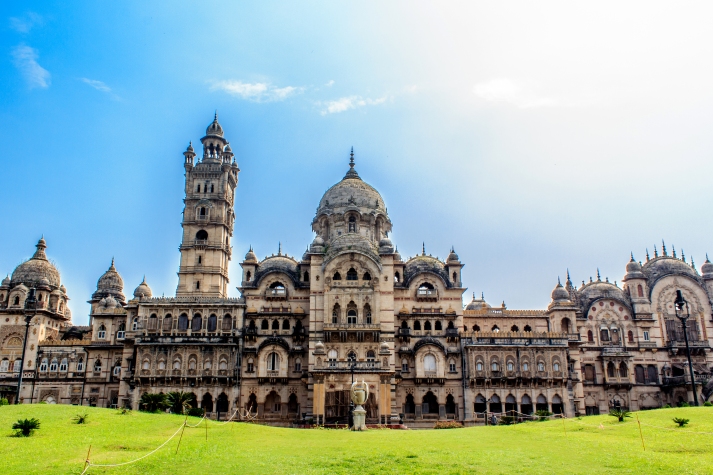 I don’t know why I had never kept Vadodara in my bucket list. After all this is one city that cares excessively for culture, a princely town devoted more to culture connoisseurs than entrepreneurs. While Ahmedabad and Surat, like other Gujarati cities are driven by a zeal for business and trade, Vadodara is more inclined to art and tradition.

Within minutes of alighting from train, one can discover the elements that so very well describe this cosmopolitan city. A board right outside the station announces ‘Welcome to the cultural capital of Gujarat’. Peckish after my long journey, I made way straight to the Royal Orchid Hotel and asked my host Manoj Sharma what he liked about Vadodara. ‘It’s laidback and people are content’ he quipped. He was quick to comment on the timings of my official tour. I had landed up during the Navratri celebrations in the most sought after location for the event.

The foundation of the city, which was apparent after a short jaunt through the city, was laid by Sayajirao Gaekwad III, the visionary monarch who established a grand University, parks, hospitals, built roads and rail system and laid the foundation of the Bank of Baroda. His patronage over art and artists shaped the cultural craftsmanship of Vadodara and continues to influence the contemporary Vadodara. His court musicians Ustad Moula Bux, Ustad Inayat Khan and Ustad Faiyaz Khan, left the city a knowledgeable appreciation of music. His passion for visual arts and literature and reverence for personalities can be understood by the fact that Dadabhai Naoroji was his dewan before he went on to become the first Asian member of the British House of Commons; Aurobindo Ghosh was employed in the Baroda College; and he paid for Bhimrao Ambedkar to study at New York’s Columbia University. Vadodara had always been a hub for artists and scholars with names like Raja Ravi Verma (on whose life the movie ‘Rang Rasiya’ is based) adding the sheen. The rich history of fine art has always held the city in high stead and even today the MSU art campus ranks among the top colleges for fine arts in India. Not just limiting itself to art, music also enjoyed a great backing from Maharaja Sayajirao and even today Vadodara hosts an International Music Festival.

The manifestation of his vision is evident in the Sayaji Baug, opened in 1879 on the banks of the Vishwamitra River. Sprawling over 113-acre, Grecian statues set in Victorian-styled gardens, a small zoo, the botanical garden, the aquarium, the planetarium and the History of Health Museum along with the real treasures, the Baroda Museum and Picture Gallery. The treasures include an Egyptian mummy, skeleton of a blue whale that stumbled up the Gulf of Kambhakht in 1944, and several paintings. Designed by Raja Ravi Verma himself, the museum is said to be inspired by London’s Victoria & Albert and Science Museums.

I got to learn a lot about the city from my host Mr. Manoj Sharma, and the more I learnt, my appetite to know the city better grew more. The imagery he was able to create with his words, made me assured that my official trip wasn’t just going to be limited to business meetings. I was advised to smuggle out some time from my business meetings for Laxmi Niwas Palace, another starting eclecticism of Sayajirao’s influences. In the afternoon, I did make it to the palace, a stately facade which never failed to capture my eye. The imposing architecture, probably the largest dwelling place ever constructed, spreading over 500 acres, said to be four times bigger than the Buckingham Palace, splendidly exemplifies the Indo-Saracenic style of architecture.  Set in a beautifully landscaped grounds replete with sculptures carrying a hint of roman mythology, the building is among the most expensive buildings ever built (close to 2 lakh pounds), with styles and facades never tried in India. A guided audio tour takes you through the palace. The mosaic floor adapted from Venetian style, Belgian stained-glass windows depicting scenes from Hindu mythology, intricate mosaic decorations on the walls, thoughtful architecture and shimmering chandeliers (among the heaviest in the world) take you to a different world where goodness of style, eloquence and flamboyance of different worlds come together.

The huge Darbar Hall, with large stained glass windows, narrating stories of hindu epics, appears to be taken out of a lavish Hollywood flick. In this hall only music conferences were organized where legends like Ustad Faiyaz Khan performed, while women watched from privacy of balconies. The throne room opposite to the Music darbar is adorned with beatific life sized paintings by Raja Ravi Verma, a kindred soul to Sayajirao, who has elegantly mixed the western contemporary style with traditional hindu designs. The walls are adorned with even more Ravi Vermas demanding detailed eyes and consoled minds for audience. The darbar leads to the elephant hall, from where Maharaja used to ascent on his elephant; the grandeur of the hall elegantly presenting its purpose. A left from the darbar takes you a courtyard where Indo-gothic style speaks, lavish sculptures with European touch speak of Indo-western synthesis. And on one side are the bathrooms – the size of a typical 2 BHK of Delhi (the grandeur and detail compels me to make such an analogy). 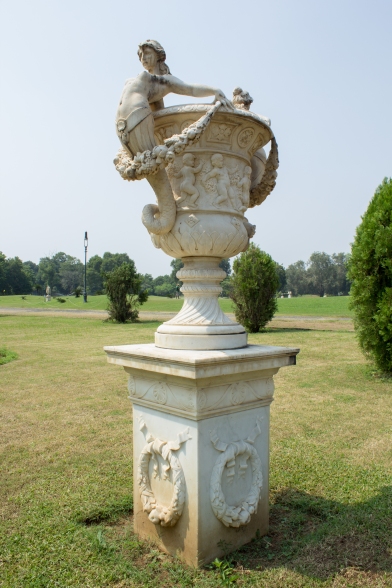 One interesting thing about the palace is the design itself, the design has a fine amalgamation of elements from mosque, church, gurudwara, temple and synagogue. While the front has elements of a temple, the sides have elements from mosque and gurudwara, there is a church bell from a church and a flat dome of a synagogue. For a person like me, who life had turned a design student, this palace is a university. The structure was started by British Engineer Major Charles Mant and completed by British architect Robert Chisholm.

No doubt it would be like undermining the adroitness of the planners by calling the royal palace just ‘beautiful’. In whole of Vadodara, there is no dearth of royal vestiges. The
Nazarbaugh Palace, the Pratap Vilas Palace, a European Renaissance structure, which has now been turned into a Railway Staff College, and the Makarpura Palace, transformed into an Indian Air Force base are among others to be kept on ‘not to be missed’ list.

My first day was entirely spent on the royal retreat, though deep down I felt I hadn’t been able to do justice with these magnificent piece of art, patronized by Sayajirao and adorned by Raja Ravi Verma. On return I asked Mr. Sharma about the places to see Garba and he, in his typical smile replied ‘Every crossing’. And mind you he wasn’t wrong, almost every crossing seemed drenched with Garba fever.

I left at 10 for Alkapuri, to witness the fervent activities of the new youngs. While the girls dressed in bright hues of yellow, pink, red and purple – the typical Cholis with heavy embroideries and mirror work, boys remained content with white, and only some going for brighter shades or experimenting with multi-coloured bandhaani turbans. It seemed that the entire city had lighted up to the tunes of the folk singers who could belt away songs till wee hours. And why not, after all, Vadodara is the culture capital of the state.

The next day, I followed the same routine to absorb more of the city, making my way towards the city area, where some rare jewels of Sayjorao’s passion and vision are strewn about. I was taken to the Sursagar lake, the largest artificial lake built in Vadodara with a thought of water conservation in mind. Standing tall nearby is the Nyaya Mandir, a brilliant piece of Elizabethan architecture, now serving as the district court. Next to it is the famous Mangal Bazaar (and as a Barodan friend said –‘For every mall that comes up, there is a Mangal Bazaar’), housing some exquisite food centers, I stood in a line to try the recommended Pyarelal ki Kachori, an big dumpling stuffed with a paste of moong dal, laden with spices, and topped with puffed rice and tart chutney on a piece of newspaper. Oh! So typical of Gujarat. Around me were four gates of Baroda, the Paani Gate, Champaner Gate, Geni Gate and Lehripura Darwaja; these are remnants of the princely Baroda state, now they hold massive market that stalks almost everything. While the new Vadodara around the Alkapuri and the Akota area carries a cosmopolitan whiff, the city area, reminds of you of styles and traditions that refuse to decay.

While every part of the city dishes out a different feel, one thing remains constant throughout: the many hoardings that dot the skyline to inform the residents, about plays, shows and concerts — as a symbol of cultural connoisseurship of the city.

Next was the Khanderao Market, built by Sayaji to function as an administrative building, the building now houses the Municipal Corporation and a large vegetable market. By now, I was myself looking for places like a toddler, I hoped around places, everytime discovering a new style of art and architecture. The Kirti Mandir, a large “E” shaped magnificent stone building with domes, terraces, balconies and central sikhara, built to commemorate the cremation of members of the Gaekwad family never failed to charm me. Its rooms with statues and photographs of the members of the royal family, give you a glimpse of their lives. I fell in love with the EME temple in the cantonment, crafted out of aluminum sheets, so unlike any other temple, remarkably contemporary. Though I was tired, my hankering for more hadn’t stopped. I explored the Swami  Narayan Temple, shrouded by peace and serenity, the Qutbuddin Hajira, built in remembrance of Qutbuddin Muhammed Khan, one of the generals of the Mughal emperor Akbar, the intricately carved jalis and arches of the tombs have a lot to offer for art seeking eyes.

I returned in the evening, relaxed in my spacious corporate suite and rejuvenated myself for the evening troll to Garba pandals. Seemed I had circled a course of life, with a new tale hidden in every turn.  In today’s cosmopolitan world, for me Vadodara stood out as an example of co-existence. The roots of cosmopolitanism seemed to be built on foundations of art, culture and an indigenous style of expression. So writers who write about the deep rooted cultures of Delhi, intimacy and joy of Kolkata, the frolickness and sublimity of Mumbai, the brahminical touch of Chennai or the ecstasy dished in cuisines of Hyderabad, I say here is another city, a city of cultural connoisseurs to explore and write about.