Think of Sikkim and the images of snow clad peaks, terraced rice fields, lushly forested hills, misty clouds setting in the deep valleys, whispering falls and mesmerizing cascades fall before your eyes. Sikkim is a painter’s dream – a beautiful landscape sketched by the creator. With these thoughts we set out for this land of peace and tranquillity. All along our way we were accompanied by the majestic River Teesta storming its way through the heavy boulders; its thunder cry noising out the traffic of NH 31 – the only road that connects Sikkim with the rest of the country. Our first tryst with Sikkim was very much like treading between the familiar and the alien. We were still to reach Gangtok but we could feel that connection with nature and the rhythm in the lives of people. Journey from Bagdogra to Gangtok covered a myriad of landscapes. 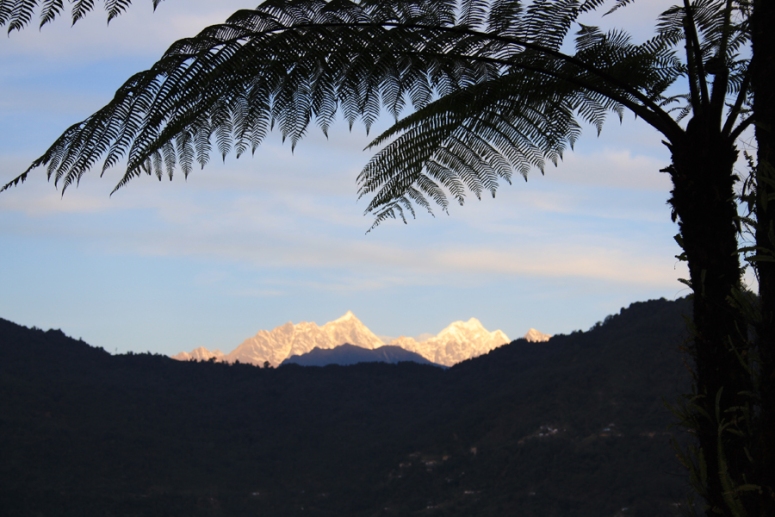 It took us about five hours to reach our hotel –Denzong Regency, a welcome heritage hotel by the ITC group – a sprawling old heritage property. The old building displaying the Sikkimese architecture glowed as the clear blue sky shone over it.  The feeling of tradition in the air added an element of pricelessness. The walls were embellished with the portraits of the royal family of Sikkim. With my eyes trying to capture the details that fill the corridors with the Sikkimese flavours, we proceeded towards the room. The way to the room involved a long walk through the verdant lawn – big enough to even give a chase to CID. The Sikkimese architecture of the hotel seemed to be speaking for itself. At a distance we could capture the beauty of the Gangtok city – the whole hill lit by lights. But above all it’s the view from the hotel that can anytime captivate you. “You get the mountain view from all the rooms of the hotel” the General Manager Mr. Satyajit told us. It is the view of the valley and the Kanchenjunga, that is priceless and the hotel flaunts it unapologetically. In fact the hotel has only the front facing rooms and has even compromised a whole storey for providing the view from each room. “We could have had 52 rooms instead of 26, but then you could not have had the Kanchenjunga view from the rest 26” Mr. Satyajit told us.

The room came with its own little pack of beauty – wooden floor, Sikkimise styled furniture and a large balcony to enjoy the morning tea and get draped in the essence of the land nestled in the lap of the Himalayas. . Our eyes hadn’t become tired of embracing the splendour of the rooms, when our stomach got a call. The butler came in with the evening snacks – Momos. Being a Delhite momos is a usual affair, but momos here made us say ‘wow’ everytime we had a go at them.  I am no glutton; but when you are told that authentic Sikkimese and Tibetan dishes are waiting for you just steps away; you feel guilty of sinning. A quick shower and we went straight to the restaurant – Gyakho. The chief Chef Tamang had prepared for us a medley of sumptuous sikkimese and North Indian dish with some saucy sambhar. Without caring about others, I filled every corner of my plate with Gyakho on one side and sambhar on the other. Gyakho means ‘100 soups’. Gyakho is a copper vessel in which eight dishes are put inside the vessel with soup and the other ninety two are added from outside. Thick and soul rich. The sikkimese dishes like doku, sukamayo, peng – shang were as tasty as their names are difficult. 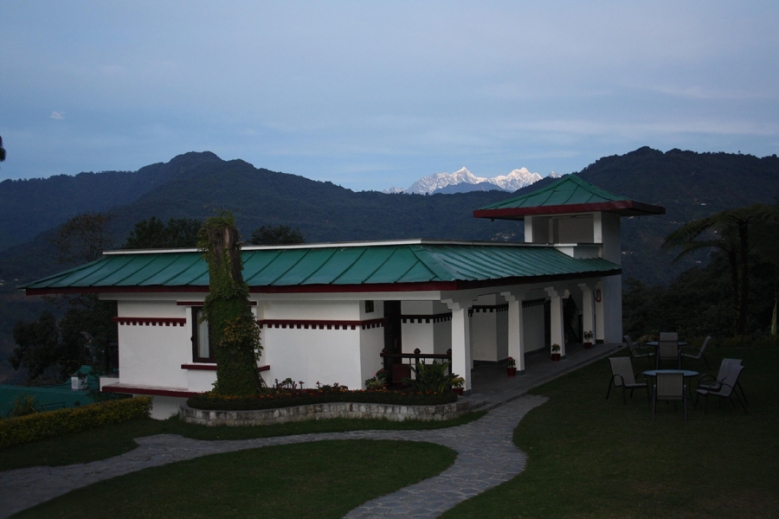 The next day was to be more arduous: a long trip to the capital of South Sikkim – Namchi. The night was short and the morning filled with freshness. It was six and I had ample time and an incentive to do nothing other than watching the local guardian of the city Kanchenjunga: the third highest peak of the world while sitting in the balcony enjoying green tea from the tea estates of Tami A mealy breakfast and off we hushed to sleepy and peaceful South Sikkim. Winding roads etching into the steep mountain slope, the constant gurgling of River Rangeet chirping of birds in the woods around us and unspoilt mountain air filled with the fragrance of flowers flooring the deep valleys; every turn showed some unique colours of the unexplored South.

South Sikkim is quite new on the tourist road-map and is in news for some man-made marvels.

Our first stop was the tea estates of Tami. A flavoury canvass dotted with a few secluded trees – Tami tea estate provides a fine setting forpicturing a farm-house for oneself. . Temi tea gardens were established way back in 1960s by the then Sikkimese government under the last King, Chogyal Palden Thondup Namgyal. We learnt from our driver that the tea produced here is a rare combination of liquor and flavour and fetches some of the highest rates in the International market.

Just a few turns ahead was Damthang Biodiversity reserve – a unique blend of village tours, soft treks, and bird watching – a small but complete package for an easy day out.

A little ahead of this was Namchi –capital of South Sikkim. Our first stop in this beautiful town was to be the ‘wish fulfilling hill’. This hill – Samdruptse hosts the highest statue of Guru Padmasambhava. Guru Padmasambhava was venerated as the second Buddha in the Tibetan culture. This 135 ft high statue has been considered a major cultural heritage of the state and is visited by a huge number of devotees. The temple is situated on a quite hill. Samdruptse hill is a dormant volcano and the legend says that the Buddhist monks offer prayers to keep it calm. The hilltop offers a view of Namchi Town, Darjeeling, Kalimpong, Mt. Kanchandzonga and eastern part of Nepal from different angles.

The statue is no doubt an engineering marvel but something more inviting was waiting for us. This sleepy town of South Sikkim has recently been in news because of a very innovative cultural cum religious centre – Siddheshwar Dham. Called as ‘Chaar Dhams’, this is situated at a distance of just 5 kilometres from Sandruptse. A facsimile of the actual four dhams of the Hindu religion, this unique cultural site brings the four pilgrimage sites of India at a single destination. The dhaam also houses the 108 ft high diety of Lord Shiva with replicas of the 12 ‘jyotirlingas’ enclosing that and an elegant mock structure of ‘Shirdi Dhaam’. This place is regarded by the locals as a haven for salvation, prosperity and peace.

The site is a real eye-catcher: a grand gallery displaying the sikkimese art and the lush green garden festooned with fountains at different levels. We stood at one end to enjoy the panoramic vista of its heavenly beauty. One thing is assured at this place – a constant look back to enjoy the brilliance of artwork. A splendid blend of human creativity and nature’s beauty – the place offers some of the most kaleidoscopic sceneries one can dream of. The steep hill slopes gently brushed with lively orchids being guarded by tall pine trees seems to get narrative with every swirl of cool breeze. The place provides even a better setting when the lights are switched on. The temples shine like a jewel placed in pristine verdant forests.

This was our last destination and we had to head off to Gangtok again. It had to be a drive through the same track. But things don’t seem to get repetitive in these places. The place is like a hidden dream – and only the word ‘unparallel’ can define it.