From the beginning, I was sure, day 2 was going to be as exciting as day 1. We had by now, tick marked three of the #bigfive of Africa and we prefixed our agenda to first lookout for the remaining two of the big five and then try our chances on the migration yet again. And to a certain degree both looked achievable. We soon added a third wish to this list – spotting a Cheetah. And James smiled, the sort of smile only Gods or elves are allowed to have.

Confession: Two of our wish were fulfilled. 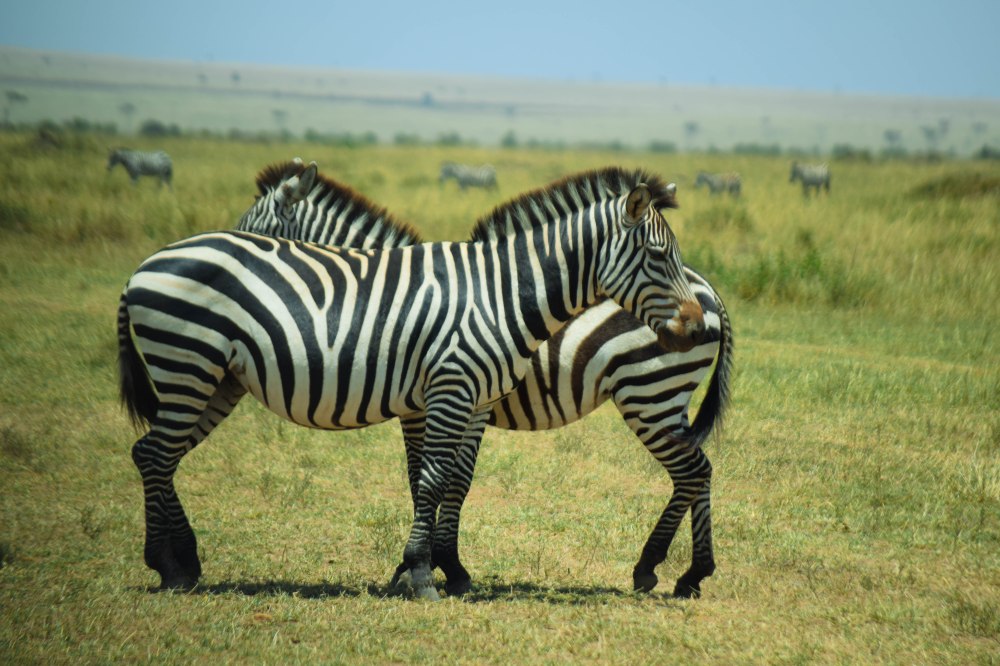 So we filled our tummies to the extent possible with left-over fruits and sandwiches and every variety of edible thing available with us and set off to second round of our incredible journey. With full day in hand, we were pretty confident of having all our boxes tick marked.

James wanted to start the morning with Rhino spotting or else we would miss the habitat. We spent almost an hour in the morning to spot a rhino but we weren’t just getting lucky. We however, spotted a big herd of hundreds of buffaloes; the day before we had mostly spotted lone buffaloes. Driving through the grass as they stand mooing was a sight.

As James felt the best, we drove towards the Kenya-Tanzania border or the extreme end of the Mara triangle, to try our chances to spot a Cheetah. Soon the landscape started changing, the undulating landscape of Mara was gradually turning flatter.

“Do you notice the change in size of grass and colour here?” James asked, almost like a pop-up quiz.

The grass was shorter and yellower, technically coarser. We were entering the Serengeti plains and the change in vegetation was palpable. And then we entered the fields to witness, possibly, the biggest animal fair of my life. The dry, flat plains were bubbling with life. There were possibly, thousands or millions of wildebeest and zebras grazing on the tableland, undoubtedly, till the point eyes could reach. We halted to breathe in the moment. That was the OMG moment of my life. The noisy, distracting wildebeest had turned the most beautiful thing on planet.

And when we had started thinking, things couldn’t get better than this, we were behold by the sight of a Cheetah family. A mother Cheetah rested on an ant-hill and her three matured cubs on another dome, from where their small heads were barely visible above the sweet red oat grass. Trust me there is no animal, who can keep you in a more click frenzy mode than a slender built Cheetah. With its slender design, bushy and flexible tail, well-camouflaged dotted body, long legs and a black strike around its mouth to reflect heat, Cheetah looks like an ‘ultimate chase machine’. No doubt watching it go for a chase, can be the most exciting ‘2 minutes’ of an African safari, but even otherwise, just watching it keep a guard or mount on an ant-hill, using it as its pedestal to watch its territory is an awe-inspiring view. And mind you, cheetah kids are super curious; one of them almost wanted to get on our car.

We drove further, only to meet more wildebeest, waiting to migrate to the Kenyan side. Migration had been late this year, due to late rains and thousands of wildebeest were still to cross to the other side. Seeing such a huge herd, inspired us further, to set off to watch a migration happening. And it requires you to hop from one probable spot, wait to see some action and then to the other. Three hops, and we were at a spot, where an unimaginably huge herd of wildebeest and zebras had gathered. And migration is just unpredictable. One moment the wildebeest and zebras are munching on grass on one side of the river. And the next, seized by a switch of some collective brains, thousands make a mad dash to cross the river. And this uncertainty is equally responded by travelers on both sides of the river. One moment, there is a long grin of wait of several hours and the next, all the human souls get active with their cameras to capture this rare moment.

And then the migration started. Some random wildebeest jumped in the water and triggered the event. And then the zebras joined. The muddy water was teeming with hungry crocodiles, waiting to snap these beasts. It was all in a dramatic frenzy, columns of panicked wildebeests leapt into the water to battle across and crocodiles swiftly darted to get a chance to snap a beast. For next thirty minutes, everything seemed to have got stalled to witness this migration. And then, as explicably as it began, it stopped. It stopped me too. I was moved, my spirit had moved. On our side, a lone wildebeest calf mooed, his mother was on the other side. It mooed for its mother and then decided to cross back, to meet his mother. I had witnessed a ‘circle of life’ and an existence of a force called ‘love’, which made that young calf, cross the turbulent waters again.

As we took a reverse turn, all thoughts evaporated. These thirty minutes had taught me the meaning of ‘life’. We were returning to our camp site, now no one anticipated or wished anything more. But things were differently decided. We met a herd of elephants on our way, who modestly stopped and posed for some cute pictures to be added on the list. A little further, a small group of endangered hartebeest (now endemic to Mara and some scattered pockets in Kenya) waited.

We were ending our day on a happy note, these two days of camping had given us countless moments to take with us as memories. Some more minutes of driving and we crossed Masai Mara, after sometime we crossed James village where he descended. Wildebeest and gazelles were still there, grazing on attached conservancies and some outside conservancies. I looked back to take an eyeful of the place, I had itched memories on those rocks, the tall grasses and the wrongly strutted acacia trees. I am sure, I would come back for it, could be next year, or the next, but surely someday.

Confession: We tick marked every box, except for spotting a rhino – so technically, we couldn’t complete our #bigfive.

Being in Mara is like reading an amazingly written script, every turn has a new tale. No doubt, Mara is the most spectacular experience one can have, it’s like an anchor dropping to the other world, the world more engaging than ours. Most travelers want this engaging interaction with the wild world, but end up being locked in their hotel room, only to come out for the game drives. That’s not my way of seeing this world. You can always choose to camp (choice I prefer), with a team of armed guides or just do solo camping in Mara. All you need is careful planning, a sense of adventure and local knowledge to sleep a romantic sleep with the lions. And all it takes is an extra $30 on your park fees ($70 for foreign nationals). Get a good camping gear (endless options in Nairobi), set up a camp and as night descends, fuel your fire, watch the starry night, prepare your barbeque and talk about the next day’s routes. And as night advances and shadows become long and creepy, the sounds from the jungle would amplify and the feeling of not being alone will set in.