Conversing with a nonagenarian is like collecting some pages off the calendar or redrawing some history from a person who barely remembers what he had in the morning for breakfast. Indeed a tedious task. But, the moment you ask of his good old fighting days, the geriatric time machine turns a raconteur; the years dissolve and clarity returns and tales of old fights pour as if it was all yesterday. What a dilemma to see a person, who barely remembers his age or for that matter his name, but is eager to give an account of his fighting days, tales from his youth and all with exacting clarity.

I was in Longwa, a small village on Indo-Burma border in Nagaland and conversing with a headhunter, who had suddenly got into his warrior mode, stabbing the air with his spear. ‘I killed 10 men’ he recalled, with an obvious pride. He then adorned his necklace, which has metal carved human skulls on it and then showed me the machete he used to cut off the heads.

‘It is a hard job to cleave a human head off his body’ he added and with every new head, his tattoos on the body would grow bolder. The Chaita or the queen of the clan was entrusted with the job of tattooing the warriors. The headhunters weren’t cannibals, they just believed in good offense to protect their lands. And what can be more offensive than cutting off your enemy’s head and exhibit that in your village. The Naga ended headhunting in 1960s with the advent of Christianity. Five decades; but the legend still lives, firing in the impromptu performances of the headhunters and their tattoos. And these black inked face tattoos, that gets your attention, though faded now, yet shine as a mark of invincibility.

A warrior had to go through a long and painful process to get one’s face tattooed.

‘It was painful, it was more like dying every day, for two weeks’ he said. A barb was dipped in pigment and then hammered onto the skin for a face tattoo.

‘And what about women? Did they also had tattoos?’ I asked like a curious cat.

He chuckled at my question, I smiled in return, anticipating another interesting story. ‘They used to have tattoos on their legs upto their knees, those were rings, a ring would be marked when a girl reached her puberty to mark that she is ready to be taken and then a series of rings upto knee upon marriage, to signify that she is taken.’ Interesting indeed. The old eyes became teary as he recalled.

I took leave from a fierce warrior to hike up a steep way, right smack on the National border to be at the Angh’s house (territory chieftain), whose half house is in India and the other half in Myanmar.  It is said ‘Angh eats in India and sleeps in Myanmar’. He sat near a fire on a mud floor, smoking opium, above him were skulls of mithun and antelopes, hunted by his ancestors, serving as trophies of their valour and prowess. Opium is another inseparable part of the culture of Longwa and I soon joined their company for some more conversation over smoke and grass.

‘I have heard there are skulls in some village’ I asked.

‘You are sitting on them’ came his prompt reply. For a second, I shuddered and my guide had to jolt me. The skulls had been buried under the meeting room when the village adopted Christianity.  Some skulls have been kept at Shengha Chingyu for exhibition to tourists. The konyaks were pretty different from other tribes, they were apparently absolute rulers, unlike the more democratic Angami or Ao tribes. Konyaks ruled vast swathes of land, and were always in look to siege more. They didn’t just fight with each other but also extended their territory all the way down into the plains of Assam when the Ahom rule in Upper Assam was falling. And one thing that aided their conquests was their dexterity in making guns, which one can still find the konyak males carrying with them.

The chieftain place is an important place for tourists, quite evident from the villagers selling their souvenirs, outside his hut. Souvenirs, yes, Konyaks are famous for their bead art and metal carving, and here you can get a skull necklace or a necklace with boar’s teeth or an artpiece fashioned off a thigh bone (looked more human) with some delicate carving on it. 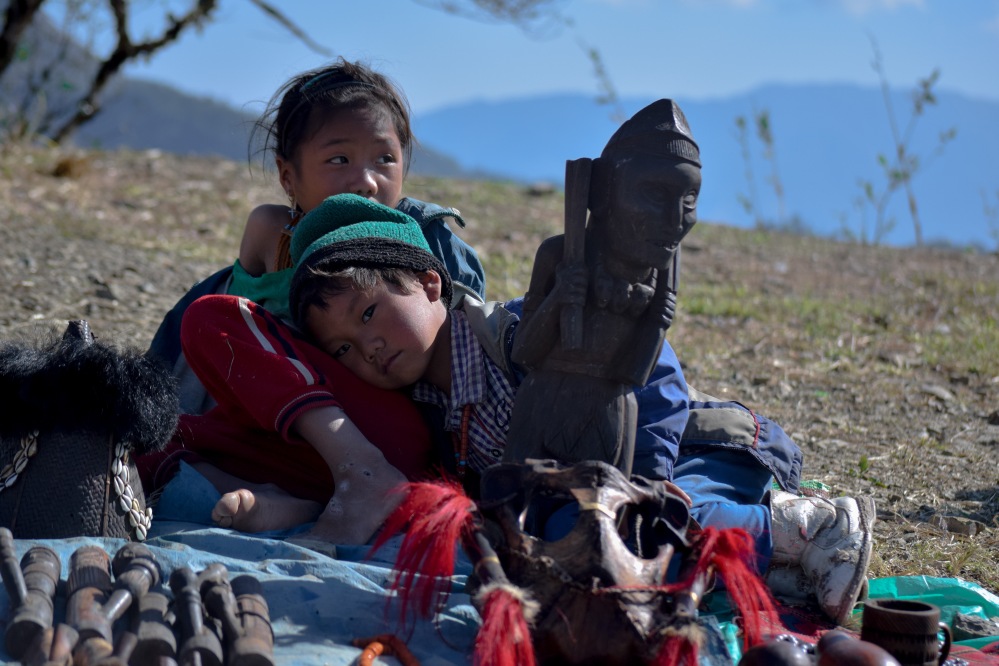 In all, life exists in these villages in two forms – the somewhat preserved past and the lost present. I realized that life has no edit buttons, it can’t be photoshopped and you can’t put a filter on reality. And the reality is that history exists only in the tattoos on these senile faces, and the headgear and colourful tribal wear are only costumes to be worn in festivals or cultural shows. Life has changed, lived and lost over opium smoke, smuggled from Myanmar.

Longwa is a gateway to a historical chapter that might get buried with the old headhunters. A tale’s slow death. I asked my guide “Do you think visitors will come here after all the headhunters, who are in their eighties and nineties, are gone?” He was stumped by my question. The answer is he had no answer to that question. A magnificent chapter of the tribal history will be lost with the death of these headhunters. I hope the cultural heritage of the Konyaks comes to the rescue of tourism in these – one of the remotest villages of India. I looked at the beautiful rolling hills, the inquisitive faces and the mud huts and smiled at the headhunters’ tale’s dirge.

To reach: You will have to take a shared cab from Mon district to reach Longwa, which is 42 Kms from Mon. You can take an overnight bus from Kohima or Dimapur to reach Mon or can use the Jorhat route to reach Mon. Jorhat route is relatively shorter, but you would require to change bus at Sonari, Assam and board another bus or shared jeep, available at Nagaland border to reach Mon.

Stay: Mon has only two hotels to speak of (cost INR 1000). You can also opt to stay at Longwa at a guest house; the amenities are very basic or opt for a homestay in Longwa.

Guide services: It is always better to take a guide for more in-depth accounts. One can do without a guide too, if a good background research of the place is done. You can contact Mr. Longshaw +918974390751 for guiding services.

Travel Tip: Combine your trip with the Aoling festival (April first week every year) or with Hornbill Festival (Dec 1 – 10). Konyaks perform in their tribal wear tin these festivals.