In the next morning safari, I was shamelessly focused on spotting the big cats. Tom wasn’t enthused, he knew cats are elusive, but out in early morning meant more chances. We hadn’t gone much, when we came across a small herd of elephants and in Africa, you couldn’t help but stop when you come across elephants. There is nothing ‘enough of it’ for elephants. As we looked, a young male started walking towards us. He raised his trunk up in the air to familiarize itself with our scent, walked towards an acacia tree, knocked it down to show his prowess and looked at us with intense gaze. It wasn’t giving any signs of a charge, but his actions, by that time, had scared me. He walked closer and was soon within a meter of distance from us. We literally shared glances, like first time lovers on a valentine’s day. I don’t know if elephants smile, but I would still prefer calling that a smiling gesture: or rather a welcoming one. He raised its trunk again, blew a low trumpet to which Tom responded, he jerked his trunk and flapped his ears and the next moment was running his trunk on my face. No issue that my face was covered with elephant’s mucous (being an ardent hindu, I would take that as a blessing of Lord Ganesha). He moved around the car with his usual gesture, seemingly enjoying our company. It was a too close, too personal moment for me.

We moved on, feeling more desperate. I had seen hardly anything feline by this time and my expectations had started tempering down. Even a cursory glance is a blessing. Tom paused, moved his head to a side, almost pricking his ear. The signs were clear: hyenas whooping, means a hunt or an attack.

“We will follow this call, we might get to see a face-off between lions and hyenas.” Tom announced, much to my pleasure. A standoff, you can’t ask for more. On our way, we came across numerous antelopes, with heads down, trudging towards a horizon’s promise. All this didn’t matter, we had to be at that spot, catch the real action. Next fifteen minutes and we were there – a pride of four young lions and two lioness had hunt down an eland and a group of sixteen hyenas around them, whooping and crying to irritate the pride. Six to sixteen is a bad ratio, the game was with the lions and they knew it. They had, by then finished with filling their bellies but were reluctant to leave the remains for the hyenas, who by this time, were salivating. Tom told me that a lioness can stand four hyenas and a lion six. So to defeat a pride of six, hyenas probably needed another eight in their team. Tom swung the car off the track, so that we were right in the middle of the action pitch. One greedy hyena made a dire attempt, but was punched back mercilessly by the reluctant lions. The hyenas were now more cautious. Two of the lions, heaved themselves up and padded away. Hyenas had taken to a side by then, probably waiting in the shade for lions to retreat.

“This will probably continue till evening. Lions are up to their belly and will most likely rest than move. In that case hyenas will have to wait.” Tom said. 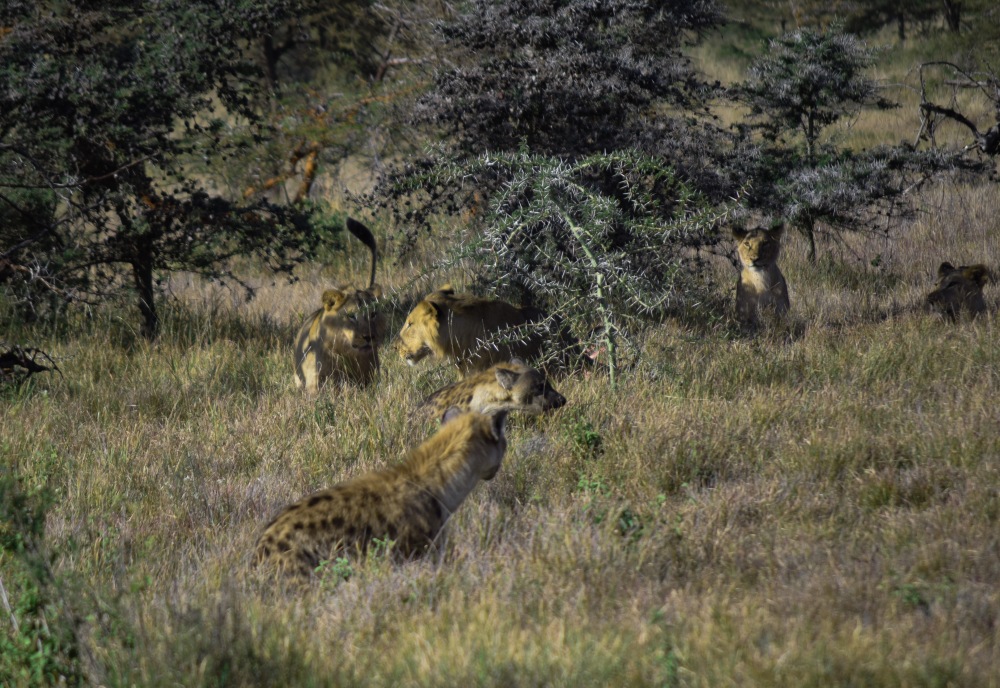 And lions weren’t the only cats. We drove past a resting leopard near the waterhole, hiding in the plumage, probably looking for a prey. But the most extraordinary was a cloud of dust that soon metamorphosed into a herd of Gant Gazelles and a lone cheetah trying to smack down one of the group in a chase game.

I was back to my camp after this cat-tastic game drive. Seriously, there are handful of places of places where you can see nature at its best play, coming across all the big five and some endangered species. This small pocket of wilderness reserves that African dream. With its miles of open grasslands, rolling landscapes, the mighty ranges and a vastly diverse flora and fauna, Lewa is, no doubt, a handpicked Africa.

Pack with a purpose

Lewa Conservancy has a community outreach programme and a part of revenue goes to communities living around the conservancy. All camps inside Lewa organize a day tour to the villages and community institutions. As a traveler you can be a part of this and contribute towards this greater cause.

Stay: There are four camps inside the conservancy – Lewa house, Lewa Safari Camp, Lewa Wilderness and Sirikoi. I stayed in Lewa Safari Camp which is fabulous. There are some campsites too where one can go and camp. The resorts arrange for the game drives.

To reach: One can either take an air route (45 minutes from Nairobi, cost around 100-150 USD) or arrive at Lewa strip or opt for road travel. Taxi from Nairobi can charge you around 10000 kenyan shillings. There is another way which I took, take a shuttle from Nairobi to Isiolo (just 600 shillings). You can actually get down at the gates of the conservancy. The conservancy is four kilometers from the Meru-Isiolo junction. On way back, you will have to take a matatu (mini van) from the Meru – Isiolo junction to Nanyuki town (300 shillings) and a shuttle from Nanyuki to Nairobi (300 shillings).